Langston’ Integrated Network College (LINC) was created in 2003 with the support of a National Science Foundation grant of$2.6M as well as the support of Langston University’s community of staff and faculty. It has emerged as a training ground and showcase for Langston’s scholars in STEM (Science, Technology, Engineering, Mathematics) disciplines.

LINC participants come from a pool of applicants that vie for scholarships, as well as for the prestige and support that the special program brings.  While most applicants are  Oklahomans, others are from various other.  High school students throughout Oklahoma learn about the program through word-of-mouth, and from Langston recruiters.

Since its creation, the LINC project has carefully nurtured  between 30- 35 scholars per year.  However, its teaching and learning programs and processes serve the entire STEM student body.  For instance, its Competency Performance Recordings for Learning (CPR-L) introduced an innovative teaching and learning  strategy that  enhances retention of subject matter and produces documentation of a student’s grasp of specific subject matter.  Its STEM Digital Village has created a cyberspace  community of information sharing that extends beyond Langston’s campus, and showcases achievements of LINC scholars. 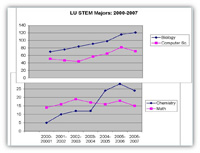 Participation in the LINC project is the doorway for students to become involved in impressive research internships at various universities and research organizations nationwide.  Students leverage their research experiences to gain entry into competitive research presentations at events that include the highly competitive Emerging Researchers National (ERN) Conference and the equally competitive Beta Kappa Chi and National Institute of Science (NISBKX) Joint Meeting. Langston’s LINC scholars hold their own among presenters from other HBCU’s and comprehensive universities that include University of California, Los Angeles, University of Arizona, Alabama State University, St.  Johns University,  and John Hopkins School of Medicine.

There has been a 600% increase in number of STEM undergraduates involved in research, and a 450% increase in awards for interns’ research presentations.

The number of STEM scholars accepted into MS/PhD programs increased by 133%.

LINC is the brainchild of Langston Chemistry Professor and Department chair, John K. Coleman, PhD,  whose philosophy for learning includes an unyielding belief in such age-old adages as start where you are, use what you have, expect excellence, and learn the basics – reading and math.  He believes that old-time teaching and learning techniques, when combined with 21st century technologies, have the ability to transform learning among students of all backgrounds and ethnicities.  This applies as much to STEM learning as to other disciplines. Above all us, Dr. Coleman says that it is the climate of cooperation, collaboration, and support within the university community that enables ideas to become reality.

Langston University is among the nation’s  Historically Black College and Universities.  The main campus of Langston University (LU) is located in Langston about midway between Oklahoma City and Tulsa, cities in which the university has established upper division urban centers.